The year is 2019.. Lady Gaga signed a 5-year Netflix contract for $120M. You open up your Netflix and the main screen looks like THIS.

PSA: Remember to breathe, and don’t forget this is entirely a satire (but we wish it were real).

Using never-before-seen footage from her music videos and other projects, Netflix has developed a massive collection of Original projects featuring Lady Gaga.

The deal was announced over a year ago, but Netflix wanted to make sure they had enough content to roll out the day of release. 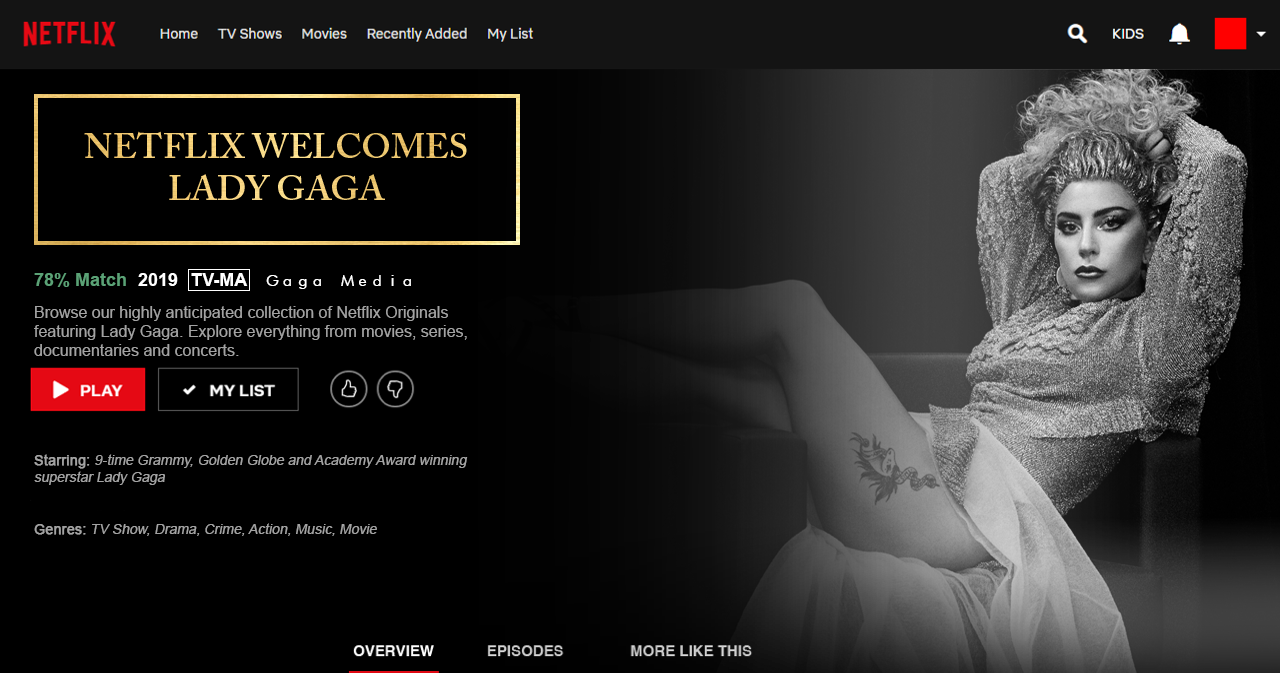 Lady Gaga was granted her own section on Netflix where fans could browse all content related to her, which ranged from movies, TV series, documentaries and concert events.

The first of many was titled Just Dance.

Shortly after the first release, Netflix announced the first series starring Lady Gaga, titled “Paparazzi” inspired by her hit single. The show featured all of Lady Gaga’s past lovers. 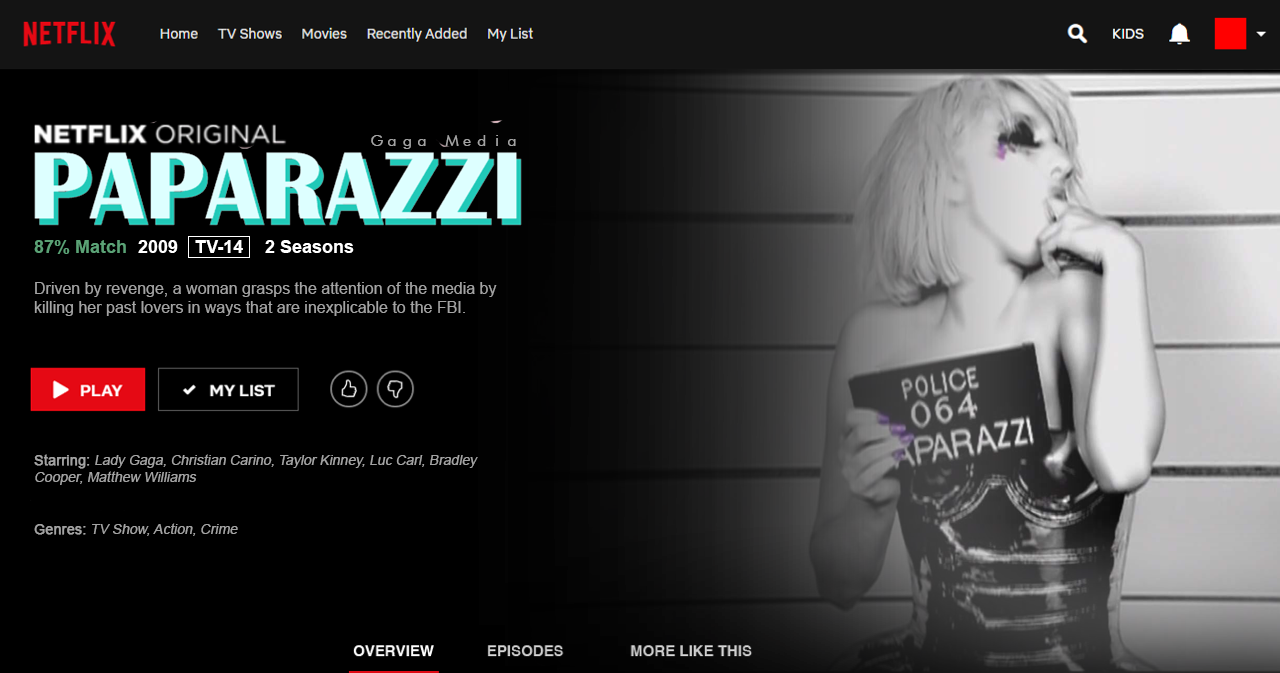 The hype for the show was HUGE and Netflix spent tons on marketing. It was renewed for 2 additional seasons. Netflix followed up with a new film titled “Judas“, which caused much controversy because of storyline and characters. 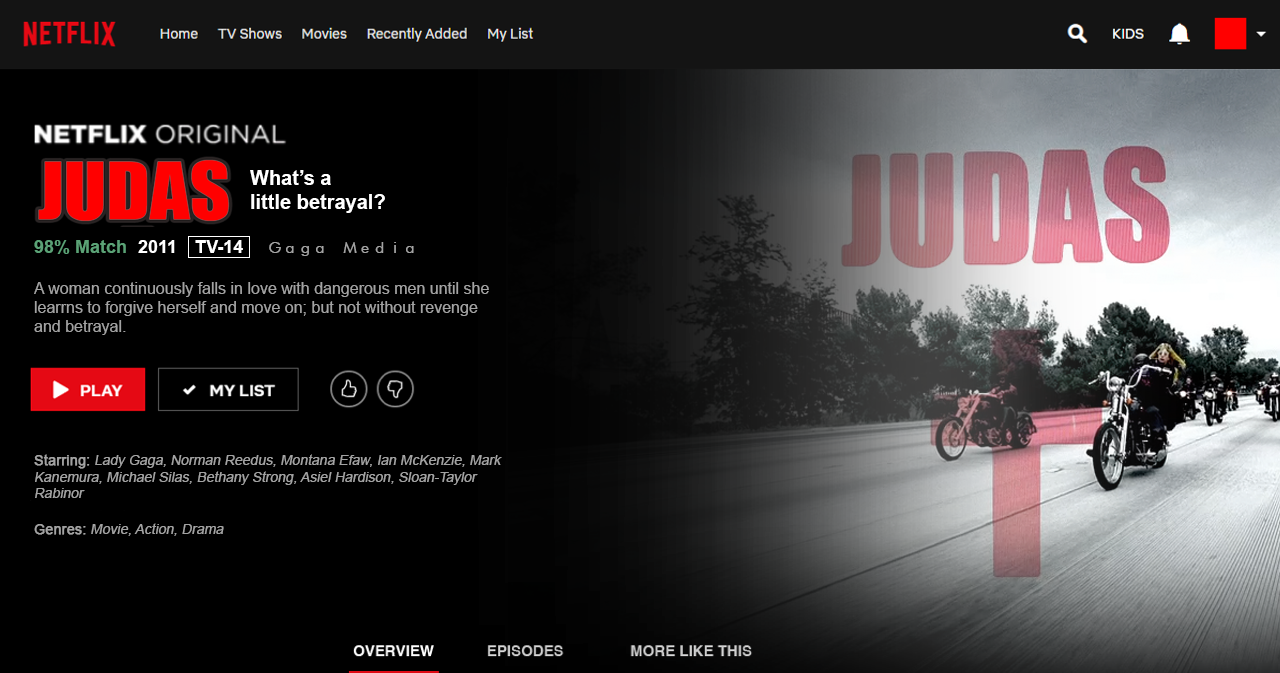 Netflix’ ratings have been booming since the day the deal was announced.

The actress went on to assure everyone that she didn’t care what the haters had to say.

Lady Gaga then signed onto Ryan Murphy’s project surrounding the assassination of Gianni Versace in which she played the role of Donatella. She went on to win a Golden Globe and an Emmy for her role in the show.

*SCREAM* Finally, after much anticipation, Netflix releases “CAMP! THE MOVIE” with a star-studded lineup! 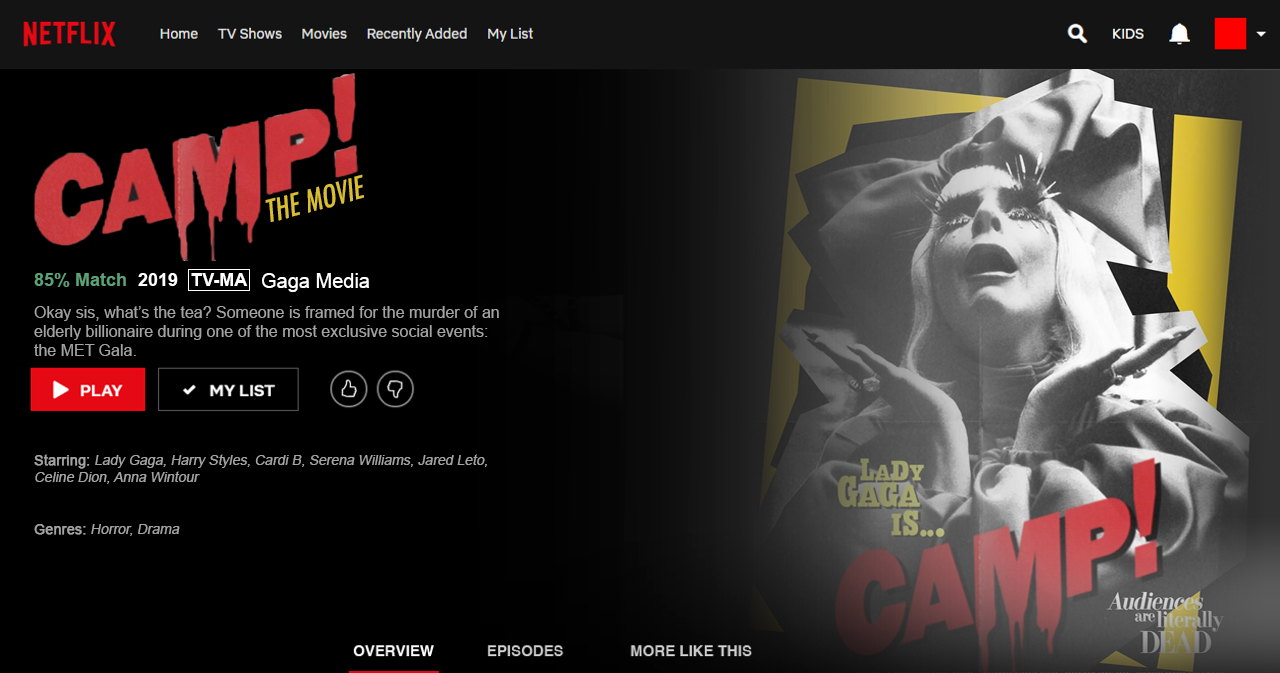 Due to the success of her Las Vegas residency, Netflix announced the first-ever two-night special event where they would be premiering not only one but BOTH of Lady Gaga’s residency shows on their streaming service. 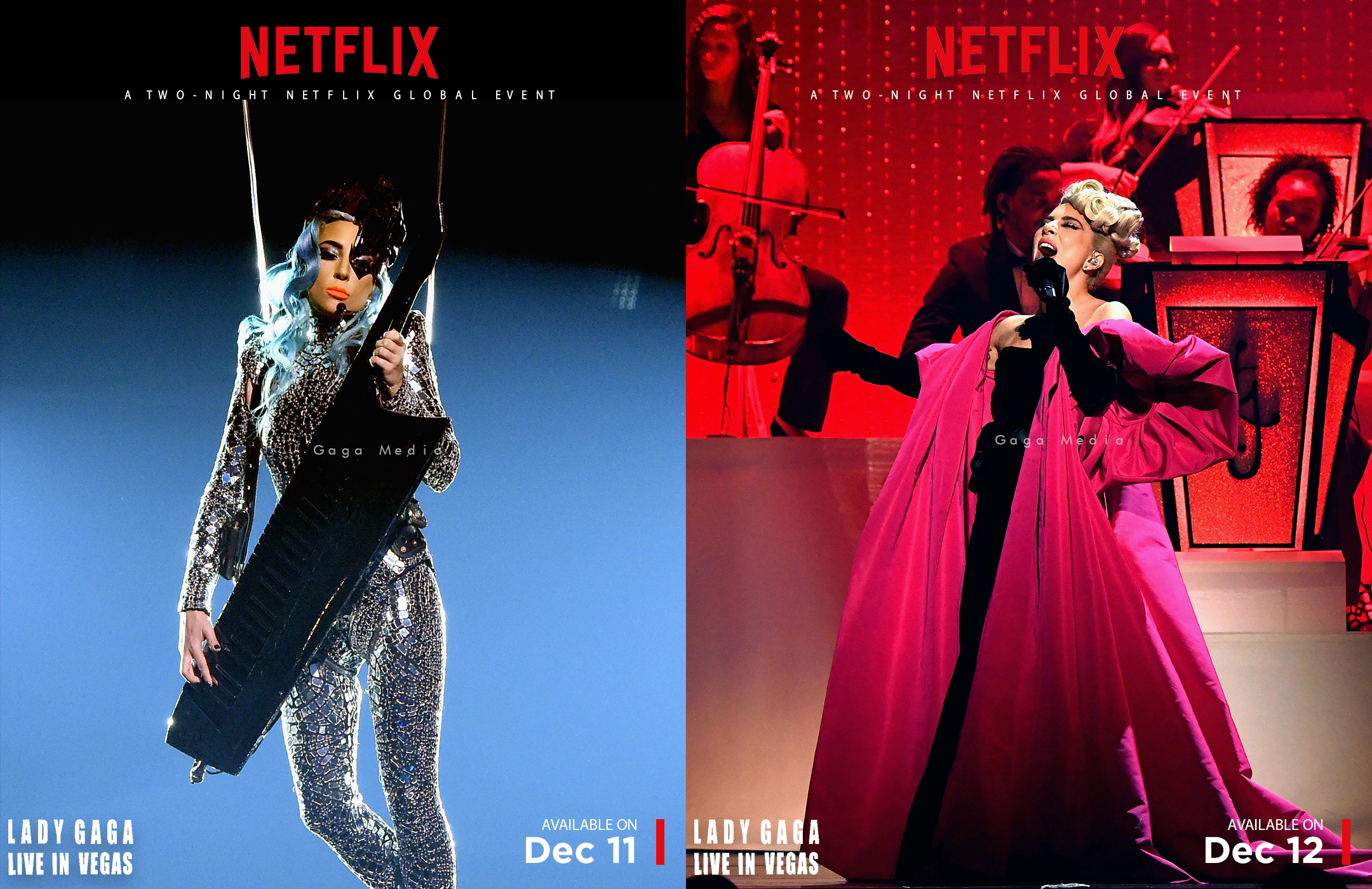 The residency shows were a global success on Netflix where 40.7 million household accounts watched the music concerts within 4 days of their release. A month later, Netflix unveiled ALL of Lady Gaga’s live concerts would be available to stream.

It comes to no surprise that the Born This Way Ball was the most watched out of all.

Is there something she can’t do? Netflix’ latest project, slated to be released in 2020, features a documentary detailing the hard work Lady Gaga put into her upcoming beauty brand: Haus Labs.

Step into her world and witness the creation process. HER HAUS. HER RULES. Last but not least, Netflix announces a new extension to their streaming service: LIVE CONCERTS. 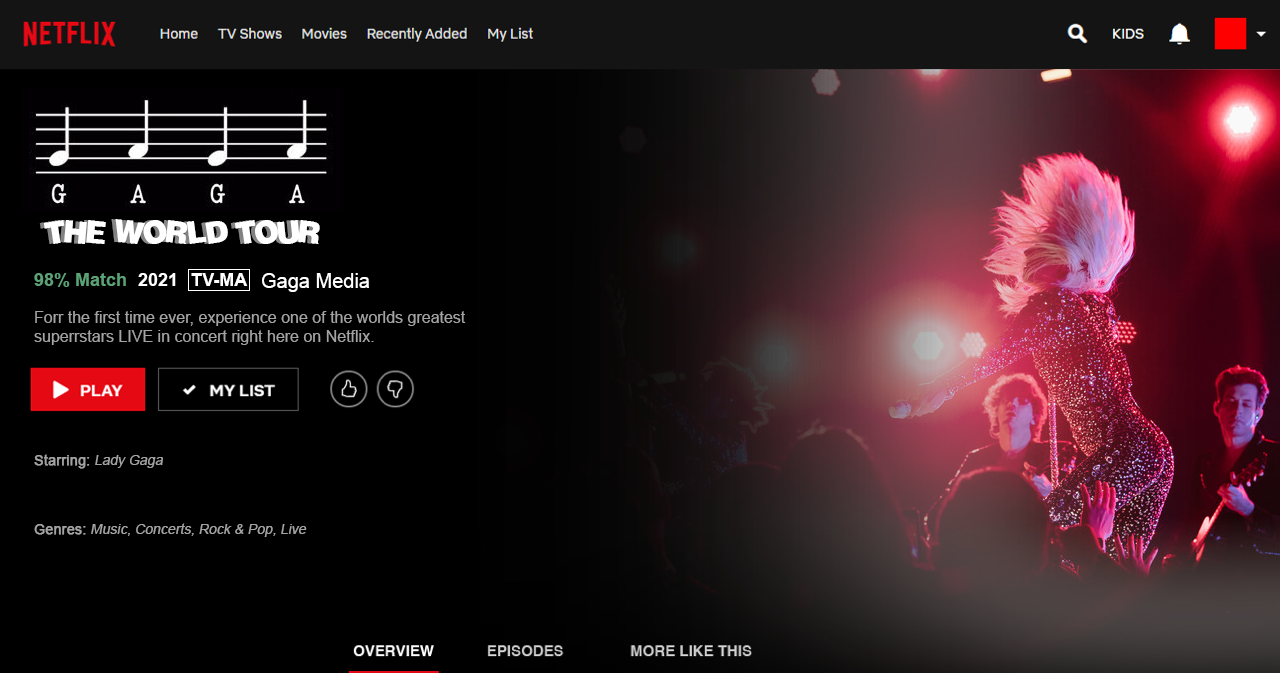 Are you shook? ARE YOU?