A lucky member from our team was able to attend one of the early screenings of A Star is Born on September 26th. Below is our review of the movie. Spoilers are indicated in the spoilers, read at your own risk.

Let me start by saying that I absolutely never expected this movie to receive the amount of praise it is currently getting, and now that I’ve finally seen it… the praise is CERTAINLY warranted. I’ve only seen the movie once, but I can’t think of a single thing I would change. It’s almost like the role was made for Lady Gaga.

Where do I even start? Everything about the soundtrack is perfection. Gaga’s vocals are better than they ever have been and let’s not forget that this is ALL live in the movie. Bradley’s singing voice has to be the most shocking of all, he can certainly sing and a standout song is “Black Eyes“, it’s the 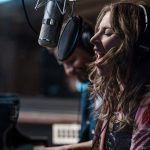 perfect rock jam. “Old Ways” is another great song that is more country oriented. Now let’s get to the duets; “Shallow” is coming to snatch all the awards it can get. The passion, the vocals, and the emotion in the song is absolutely fantastic. Bradley and Gaga’s voices blend so nicely and I don’t think there could have been a better pair.

Another stand out song was “Always Remember Us This Way“, this may be my personal favourite at the moment.

Spoiler
Gaga sings this song as a solo during one of Jackson’s concerts after he asks her to sing alone for the first time. I don’t have words to describe how incredible this song is. It’s an incredible ballad that is sung at the piano and Gaga’s vocal ability keeps improving as she sings the song.

Most of the songs in the movie aren’t sung in full, except for Shallow, I’ll Never Love Again and Always Remember Us This Way. So to give a full review of the music is impossible until I hear the soundtrack, but it obviously won’t disappoint.

Pop jams Heal Me and Why Did You Do That? really demonstrate the transformation of Ally into a pop star. They really are BOPS, but nothing more. In my opinion, the ballads are what truly stand out in this movie. However, the outfits that Gaga is serving during these performances are SICKENING. Easily my favourites.

Spoiler
Heal Me is performed at iHeart Radio and it’s one of Ally’s first performances as a solo act. You begin to see her transform as an artist against her own will as she is controlled by her label and they tell her how to look, dress and act. She rebels during this scene but eventually it backfires on her. Why Did You Do That? is performed on SNL with full on choreography, dancers and all that jazz. It’s a shame that only a short part of it is shown in the movie because everything about that performance was great. Here we see Ally completely transformed.

Is That Alright? deserves an honourable mention because this song is only played during the credits at the end of the movie and it really deserved better.

Finally, the last song of the movie: I’ll Never Love Again. I was an emotional wreck when Gaga sang this song. Just give it an Oscar for Best Song already. It’s a TIMELESS power ballad that truly demonstrates everything Gaga is capable of.

Spoiler
This is the absolute final scene of the movie after Jackson has passed away. This song was written by Jackson himself, and Gaga performs it as a tribute to him after his death. The song starts out slow, and Gaga then belts out until the absolute end. And then scene. The movie ends. It leaves you on the edge of your seat with tears streaming down your face wondering what you just put yourself through.

Overall, I would say this may be some of Gaga’s best work to date. Her vocals and songwriting capabilities shine immensely on this soundtrack.

The most surprising aspect about this film had to be that the beginning is so lighthearted. There are some really humorous scenes and I never expected that. The audience was constantly laughing 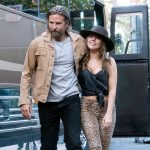 throughout the first hour of the film. Miss Ally has got some sarcasm up her sleeve, that’s for sure.

Overall, the plot flow is great, I didn’t find that there were any unnecessary scenes that didn’t belong in the movie.  During the second half of the movie, the tone definitely takes a big shift.

Spoiler
Jack is drunk and drug abuser, and this takes over his life in the film. Ally tries to help him but there is only so much she can do when she is on the road and working on her music career. While he seems to be extremely happy with his wife Ally, it seems like he is constantly trying to fill this void in his life.

Halsey also makes an appearance in the movie for a short cameo.

Spoiler
Halsey presents Ally her Grammy award, after she has been nominated for 3 of them. This scene is truly heartbreaking, but I won’t spoil this, you’ll have to see why for yourself. One thing I will say is during this scene, Ally’s outfit choice could have seriously been better.

Other cameos include Shangela and Willam, who play drag queens at the drag bar that Ally performs at. Their cameos couldn’t have been more perfect for this film. There was such a joy in the movie theatre every time one of them was talking because it always ended up being extremely sassy and funny. Bradley did a great job casting them for the movie.

Overall, there are no plot holes in the movie. Gaga and Bradley easily carry this movie on their own and the most intimate scenes between the two might be the best ones. The camera is constantly steady when the two are together making everything a lot more serious, dramatic and intimate.

Bradley certainly didn’t lie when he said this is the most chemistry he has had with someone in a movie. It’s truly reflected throughout the entire film, by the way they look at each other, perform together and just interact.

There are a few very intimate scenes but aside from that, most of their relationship is just being 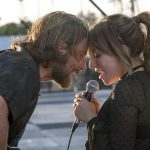 there for each other and being supportive. Their chemistry shines when they perform and compose music together.

Spoiler
You can tell the difference between Ally and Jackson’s music and Ally’s solo music. There is a huge emphasis on this in the movie and it’s reflected in the lyrics of the songs.

I couldn’t think of a better duo to make this movie, their relationship seems so effortless.

Spoiler
Jack is instantly attracted to Ally after he sees her perform La Vie En Rose at the drag bar. From there, their relationship flourishes into something truly beautiful. The amount of flirting going on in the first hour is just adorable. Their relationship quickly becomes very serious after this. However, the engagement scene seemed very rushed, but what else do you expect from a drunk?

I absolutely loved the authenticity of the performances in the film. Choosing to perform at Glastonbury and Coachella was certainly a great idea, simply because it all looked so real, which of course it was.

Spoiler
While many fans know about the two performance locations above, I was shocked to see that one of the performances was filmed using the stage from the Joanne World Tour. As a stan, the back screens were extremely recognizable, and not to mention the “pods” containing the catwalks were visible in the shots. It was definitely a great moment as a stan to be able to recognize that and it added an amazing element to the movie. 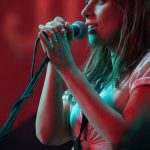 Best performance? I’ll Never Love Again, hands down. The raw emotion during that scene will cause tears to flow down your face.

There really isn’t a single bad performance. As a stan, I would have loved to see full performances of each song, but that would just make the movie even longer than it is. The music is just THAT good that it makes you crave more and more. Everything song and performance sends chills down your spine.